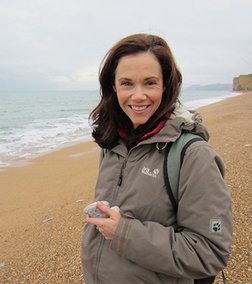 In 2014 I took up the post of Scientific Director at Dynamic Earth in Edinburgh. For 20 years previously I worked in a mix of academic and science engagement roles including a brief stint at Dynamic Earth when it first opened in 1999. My PhD is in geomorphology from the University of Edinburgh and I’ve worked in Australia, Africa and Antarctica researching landscape evolution at the macroscale. In 2002 I began presenting science radio and television programmes for the BBC including series like Coast, Rough Science and The Nature of Britain and Radio 4 documentaries on subjects ranging from lead pollution to lasers, and an award winning series on bacteria. I taught Environmental Science for the Open University for many years and I’ve contributed to a large number of science festivals and school engagement programmes. Overall my career to date has been about trying to inspire people of all backgrounds and all ages with Earth and environmental science within a wider STEM engagement context.

After three years of working closely with Penny and the team at ASDC, including assisting with the Operation Earth national programme and helping to bring the conference to Edinburgh in 2017, it feels like the right time to join the Board. It is widely appreciated that we need to raise levels of science capital across many different audiences if we are to tackle future sustainability challenges and I think that all ASDC members have a vital role to play in this. I would like to join that Board so that I can do what I can to support us all in this.